A recent (May 2021) study finds that cricket bats made from bamboo could be the alternative to the traditional willow bats.

Cricket bats are an important piece of equipment in the game. The bats used in cricket matches predominantly come from the English willow trees. A strict law governs the production and use of bats in professional matches.

So, why bamboo cricket bats? Can you use them in cricket matches?

The bamboo bats are made from 100% natural bamboo. They are heavier, stronger and more durable. Also, bamboo bats are products of sustainable bamboo plants and are eco-friendly.

Recent research by the University of Cambridge uncovers the key performance features of bamboo bats as compared to the traditional willow bats. Generally, the bamboo bat used in the research:

Check out our collection of bamboo eco-products. We research each product and give a balanced overview so that you can make the right choice.

First, bamboo culms are split lengthwise into fine strips. Then, glued and laminated into planks before being cut into the right size. The result is a much stronger, higher-density plank.

According to the University of Cambridge, the bat is made from Guadua and Moso bamboo planks. The study compare performances of a prototype bamboo bat against the traditional willow bat. It uses video technology and computer modelling to investigate the impact, vibration, hardness and compression of the bamboo and willow bats.

Interestingly, the study finds that bamboo bats show the 5 standout features mentioned above. And performed exceptionally well against the traditional willow bats.

That said, there are legal and technical issues needed resolving before using bamboo cricket bats at the professional levels.

Read more about the new research and what the MCC (Marylebone Cricket Club) said about it at the end of the article. 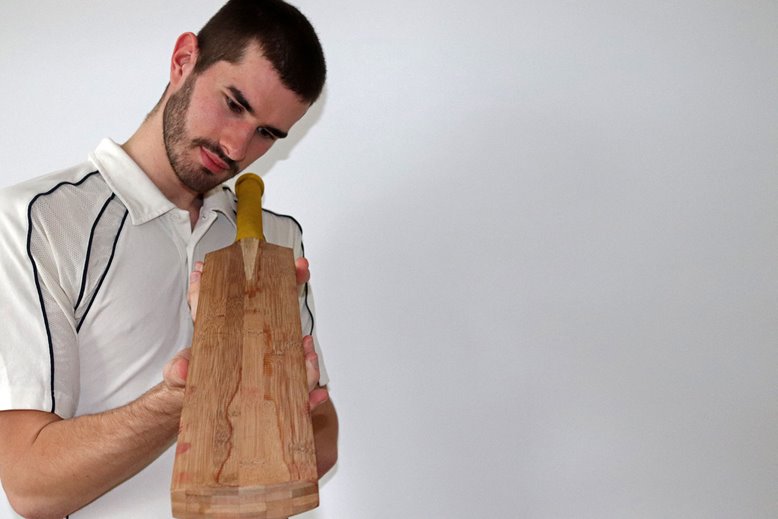 What did the researchers say?

“It has been great to see the massively positive feedback we’ve had from the cricketing community. We expected questions and reservations, but at this point in time we need to be looking to the future and sustainability. Cricket could be a real leader in that.”

“Hopefully one day we’ll have a professional player walking out into Lord’s holding a bamboo cricket bat.”

“We feel the advantages massively outweigh the disadvantages, so it would be great to start working with the MCC.

The willow trees take more than 15 years to grow to maturity, whereas the Guadua and Moso timber bamboos take less than 7 years to harvest.

The fast-growing habit means bamboos are sustainable raw materials for making cricket bats. More so, these giant bamboos grow in many parts of the world including China, India and the US.

Results from the University of Cambridge study conclude that bamboo outperforms willow bats. In part, it stated that ‘’ it’s [bamboo bat is] stiffer, harder and better under bending’’.

The bamboo bats are dense and very heavy because of the high number of bamboo strips used in a laminated plank. Their combined weight is far greater than a single plank made from the willow tree.

One of the University of Cambridge researchers said:

“We made a prototype bat and it was 40 per cent heavier than a willow. But that was based off a 2016, classically-shaped bat.

To make it better, he added:

“The next stage of our project is to take the better material properties and make a thinner bat which, although would be the same weight as a willow, it hopefully should have better properties.”

It takes a willow tree 15 to 20 years to mature whereas the Guadua and Chinese Moso timber bamboos take less than 7 years. They are fast-growing plants and tend to grow taller every year.

That means that a Moso timber bamboo grove can produce more planks in 20 years compared to a willow tree.

They are highly sustainable. What did MCC say about bamboo bats?

The MCC released a statement two days after the bamboo cricket bat study was published in the Institution of Mechanical Engineers Journal. The governing body said:

“[We] read with interest the research study from the University of Cambridge.
“Currently, law 5.3.2 states that the blade of the bat must consist solely of wood, so for bamboo (which is a grass) to be considered as a realistic alternative to willow would require a law change.

“The law would need to be altered to allow bamboo specifically, as even if it were to be recognised as a wood, this would still be illegal under the current law, which bans lamination of the blade, except in junior bats.”

It is important for the world cricket governing body to consider the impact of changing the law regarding cricket bats because it is significant cricket equipment. Here is what MCC said:

“MCC’s role as Guardian of the Laws includes maintaining the balance between bat and ball, and any potential amendments to the Law would need to carefully take this into consideration, particularly the concept of the bat producing greater power.”

In regard to environment and sustainability, MCC said:

“Sustainability is a relevant topic for MCC and indeed cricket, and this angle of willow alternatives should also be considered.

“With the researchers stating that the most suitable types of bamboo grow abundantly across China and that low-cost production could make bamboo bats a viable and ethical alternative to willow, this could provide a pertinent angle for further research and the possibility of reducing the cost of producing bats in different areas of the world.”

At present, the MCC is yet to make a statement on the legal and technical aspects of the bamboo bats.

Recently, India manufactured bamboo cricket bats. And, testing them out following the trend set by the University of Cambridge team.

As mentioned earlier, unless there is an amendment to The Bat Law 5.3.2, the use of bamboo is illegal at international stages.

Will bamboo cricket bat change the game in a big way?

Spectators like to see the big sixes, right? The bamboo cricket bats may have the answer for the hard-hitting batsmen out there.

The researchers believe the advantages outweigh the disadvantages of using bamboo cricket bats.

Meanwhile, they’ve reached out to the MCC and are awaiting a response to their findings. The international cricket body has yet to deliberate on what to do.

Going forward, the researchers are aiming to make thinner bats that weigh the same as the thicker willow bats. (Affiliate link to Amazon)

That could change the game in a big way.